State lawmakers recently sealed a deal to make New York City the first city in the country to implement decongestion pricing, a measure intended to cut down on the city’s infamous gridlock traffic, while also raising much-needed revenue to improve and maintain its aging subway system. Also known as “regional zonal pricing” or “cordon pricing,” the congestion fee is typically charged during weekdays and is waived or discounted for specific groups of transportation users (e.g., emergency vehicles, buses, and non-commercial vehicles registered to disabled persons). This differs from pricing whole roads or lanes, as we outlined in our performance driven tolling brief. Decongestion pricing programs have proven successful at reducing the amount of driving in the city, while greatly expanding and enhancing transit service. The move could be a catalyst for other regions in the United States to do the same, and we at the Greater Washington Partnership believe the Capital Region should actively join the conversation.

Traffic congestion is more than just a headache. It delays commuters, whether by car or bus, on their way to work, interrupts deliveries to local businesses of the products they need to serve their customers, and makes roads unsafe for everyone, all while wasting hours of productivity each year and putting a drag on economic growth. The Washington metro region has the second-worst congestion in the entire country, and Capital Region residents know firsthand that we are in dire need of congestion solutions. In fact, last year alone drivers in Washington lost on average 155 hours commuting, costing the region $4.6 billion in economic activity. 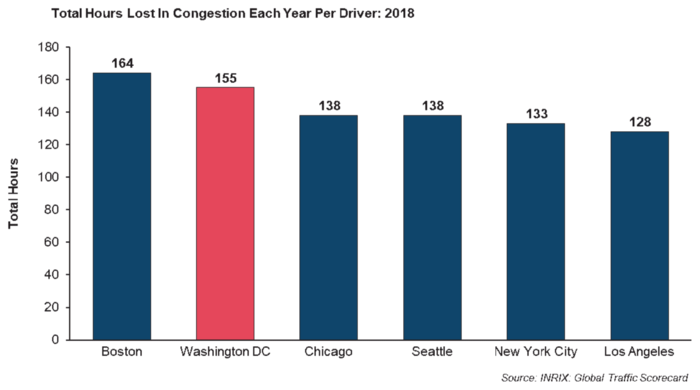 New York City is implementing decongestion pricing to attack gridlock in the city and finally provide much-needed revenue for the subway system. In the Capital Region, we should evaluate whether decongestion pricing is a viable option. Revenue generated by this program could then be used to invest in regional transit and other key investments — such as new buses, park-and-ride spaces, and bicycle networks.

Our elected officials should at least be willing to conduct a feasibility study of options for how decongestion pricing could be implemented. It may not be viable, but it would be a failure to run away from even asking the question. Cities around the globe like London, Stockholm, and Singapore already use decongestion pricing with results as large as 30 percent drops in congestion in their urban areas. The impetus for the Greater Washington Partnership to create the Blueprint for Regional Mobility was our recognition that the Capital Region is in critical need of clear and pragmatic solutions to our transportation challenges. Our preliminary analysis found that decongestion pricing in our region’s most congested urban areas would provide significant traffic relief. In fact, with decongestion pricing, the Capital Region could see 17,000 daily trips into the District shift to transit. Moreover, a 2015 study by WMATA found that charging $5 for vehicles entering the District’s central business district and portions of Arlington, combined with the elimination of free parking, would result in an increase in transit ridership of 30 percent over 2040 projections.

Unlike many peer regions in the United States, such as San Francisco, Seattle, and Los Angeles which are actively studying the feasibility of decongestion pricing programs, the Washington region has yet to seriously explore the viability of this solution. Of course, a decongestion study may come back and determine it is unfeasible or that there are better options. But not asking the question in the face of ever-worsening congestion is a recipe for deteriorating economic conditions and quality of life for our region’s businesses and families.